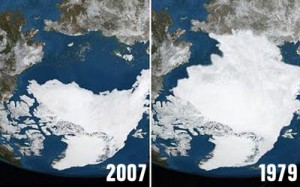 There is much more to Arctic ice than meets the eye. Our Earth has had a cap of sea ice of approximately 1000km in radius. Over most of the last 5000 years the ice became smaller in summer and larger in winter, with minor fluctuations. However, starting about 200 years ago there began a slight rise in average planetary temperature such that there was a minuscule trend downwards in the Arctic sea ice.

It is in the nature of many micro-influences in physical processes that their compounded effects over time show an acceleration in the amount of the influence and its effect.

In a stable regime the average global temperature and the average extent of ice both fluctuate between upper and lower limits. A micro-disturbance – an initially trivial increase in global average temperature – pushes the ice inexorably into a new stable regime – one with ice-free summers.

If a large extent of ice is replaced by open water, it magnifies the effect of a trivial temperature rise so as to cause a non-trivial increase in average global temperature. 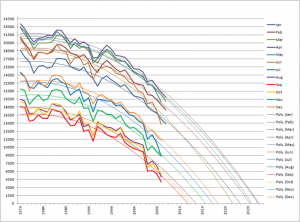 If one accepts the reality of a butterfly effect, i. e. the ability of a micro-perturbation to move a dynamic system from one stable regime to another, then one could accept the reality of an impending summer-ice-free Arctic.

A continuing decline in Arctic sea ice has been documented by scientists, in graphs and images. Overlaid graphs of annual ice extent do not show this trend: it is only when annual graphs are plotted end-to-end that the long term trend is obvious.

Climate is a chaotic system in which disturbances propagate and can amplify the original effect. If the globally averaged temperature of our planet rises by even a fraction of a degree, the physics of the polar ice regime dictate that ice loss will be greater than a simple projection based on a micro-change in average temperature would indicate.

If the loss of Arctic ice begins to accelerate, then the graph shown here indicates the likelihood of the first substantially ice-free summer in the Arctic Ocean occurring, at the latest, in 2016. 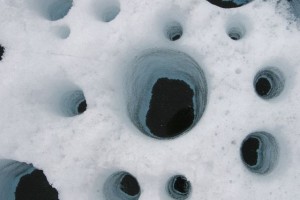 Cryoconite holes which have melted into the ice

Cryoconite is powdery windblown dust which is deposited and builds up on snow, glaciers, or icecaps. It contains small amounts of soot which absorbs solar radiation melting the snow or ice beneath the deposit sometimes creating a cryoconite hole.

This soot decreases the reflectivity, or albedo of ice, increasing absorption of heat. Cryoconite is constantly being added to snow and ice formations along with snow. It is buried within the snow or ice, but as the snow or ice melts increasing amounts of dark material is exposed on the surface, further accelerating melting.

Cryoconite may contain dust from far away continental deserts or farmland, particles from volcanic eruptions, power plant emissions, and soot. It was first described and named by Nils A. E. Nordenskiöld when he traveled on Greenland’s icecap in 1870.

Small pock-like depressions called “Cryoconite holes” are melt holes which are strewn over the surface of the Arctic and many glaciers. They look similar to a pristine snow drift after throwing a handful of gravel at it.

Since it is a dark material comprised of organic and inorganic debris, Cryoconite melts into the ice. As this dark material absorbs solar heat, it raises the local temperature, and results in the formation of such melt holes and thus represent a source of glacial erosion.

Such melt-holes have been documented in the Arctic region of Greenland, on glaciers at both poles, and on other glaciated regions such as Iceland, Canada and the Himalayas.

Cryoconite holes have been a bane to scientists working on the Greenland ice sheet, the holes being typically full of slushy ice, and big enough to step in by accident, These holes not only present a safety hazard for Arctic expedition members, they may also be an environmental hazard.

However, Cryoconite holes have been the subject of much debate in recent years; a debate centering on their role as contributors to glacial melting.

Whilst there is nothing inherently ‘unnatural’ about the presence of glaciatic cryoconite, scientists are none the less curious to understand the role it plays in both glacial melting and nutrient cycling.

It has been suggested that Cryoconite holes play important roles in the glacier ecosystems because many kinds of living organisms have been reported from this structure on the glaciers.

Within these handfuls of cryoconite ‘dust’ are a community of micro-organisms that include bacteria, viruses and algae; and depending on location, also tardigrades, rotifers, nematode worms, protozoa, copepods and insect larvae (see diagram).

Despite earlier studies showing the role that cryoconite plays in several biogeochemical processes, including nitrogen fixation (as well as fixing of other nutrients), the passage of carbon through these ecosystems has not been quantified.

A research study lead by Dr. Alexandre Anesio, Senior Lecturer in Low Temperature Bio-Geochemistry at Bristol University, has reported simultaneous quantitative measurements of primary production (the production of new organic matter from raw materials) and respiration (the use of oxygen to create energy, resulting in the release of CO2) on different glacias of the Earth.

Not only did they find that primary production and respiration in cryoconites (in summer) was comparable to soils found in warmer climates, but the ratio of primary production to respiration indicated that they were an autotrophic system. What this means is that these ecosystems are, by and large, self-sustaining or ‘self-feeding’, able to produce new organic material from inorganic raw materials, thus are essentially photosynthetic, like plants.

The finding that cryoconite ecosystems may be autotrophic ‘self-feeders’ has a number of consequences:

Firstly, our results indicate that the combined activity of primary producers and bacteria in cryoconite holes results in the accumulation of dark-coloured organic matter, which may contribute to further absorption of solar radiation and thus enhance glacial melting.

Secondly, the excess organic matter can be exported during the summer melt season to other ecosystems, including the oceans, and thus sustaining life elsewhere.

The researchers go on to up-scale their findings, indicating that on a global basis cryoconite holes have the potential to fix as much as 64 Gg of carbon per year. However, for their calculations they excluded the polar regions, as polar cryoconites tend to have ice-caps over their entrances, which keep them isolated from the atmosphere for years (though the systems within them are none the less still autotrophic).

The researchers end with a conclusion that is something of a double-edged sword:

Although primary production in cryoconites can be considered a significant sink for CO2…particulate organic carbon accumulation in cryoconite holes may ultimately contribute to further absorption of solar radiation and glacial melting.