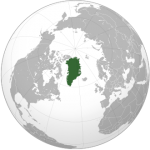 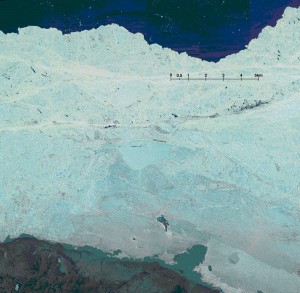 Our next expedition to the north coast of Greenland is scheduled from July 4- 20, 2012.

With the help of satellite images collected in 2005 and 2006 some  members of the expedition will attempt to locate a new northernmost island.

The first of the satellite images were taken during the summer of 2005 when the snow melt was at its maximum, and the second image was taken one year later for comparative purposes.

“From a vantage point of 450 miles in space we were able in pinpoint known and unknown islands. We couldn’t  possibly have found the new islands without a view from space.”
– Dr. Peter Skafte

The objective of expedition members is not limited to searching for a new northernmost island.  Some of the participants  may have other projects, such as: studying the effects of global climate changes on sea-ice and vegetation, geological studies, photographing the landscape,  studying particular species of wildlife, or just exploring the Benedict mountains… in areas where no modern humans have walked before.

On the next Arctic Thule expedition…

The team intends to identify an island farther north than the previous outpost.

By carefully studying the satellite photos Dr. Skafte has observed a location which he believes could be the new Ultima Thule… “the Northernmost Point of Land on Earth.”

“We hope to locate, map, and actually set foot on Ultima Thule during our next expedition.”
– Dr. Peter Skafte