HISTORY OF THE TARGET AREA 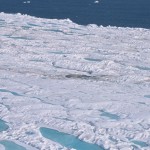 Euro-American Island seen from plane in 2003

First sighting of Euro-American Island from plane in 1998

In 1998, While flying along the northern coast of Greenland en route to Cape Morris Jesup, Dr. Peter Skafte spotted a small island in the sea-ice about three miles north of Kaffeklubben Island.

Before it passed out of view, Dr. Skafte only had time to take one photograph of the island through the airplane’s window.

The island was visited five years later on July 6, 2003, at 10:11 PM when six international explorers became the first to visit what is now called Euro-American Island - named after the team that reached it.

Once again a new northernmost point of land had been confirmed. To reach the island they had walked 10 hours over the sea-ice from the north coast of Greenland. 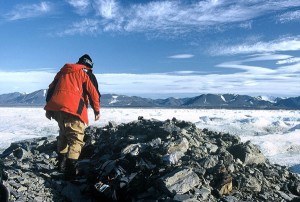 Arriving on Euro-American Island. The coast of Northern Greenland can be seen in the background.

In the 2003 photograph taken from a plane, the island’s dark outline can readily be seen.

When studying the 2003 satellite image of Euro-American Island it was seen in the middle of the image, above the dark blue sea water. It appeared as a snowdrift on top of a dark melt-water pool.

In the top of the image a ridge of fractured ice can also be seen.

The Euro-American Island was photographed from the expedition’s chartered airplane ten days after its first visit. Two years later, in 2005, our satellite image showed that the island was covered with a snowdrift next to a deep melt water pool.

All distinguishable features in the ice north of this ridge changed completely from 2005 to 2006.