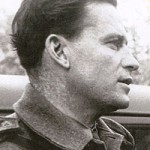 Born Hans Ebbe Munck (14 January 1905 in Frederiksberg – 2 May 1974 in Copenhagen), he was a Danish resistance fighter, explorer, Greenland advocate, journalist and diplomat.

He was the son of director Paul Munck (d. 1947) and Meta f. Iversen (d. 1953). Munck graduated from Ordrup Gymnasium 1922, received training as a political candidate in 1928-1929 and then participated as a young man in several Greenland expeditions, helping to establish the colony at Scoresby, Greenland.

Yet Munck was also adept at making those obligations more exciting by living life to the fullest. In this sense he was very modern, and a true adventurer. A contemporary of Ian Fleming (1908–1964), Munck too was a journalist involved in military intelligence operations, and had a flair for intrigue. With his resistance efforts during WWII he could be considered a bit of a James Bond… yet ever the diplomat and a Danish gentlemen to be sure, not the rakish undercover agent.

Munck’s assignment as Berlingske Tidende’s foreign correspondent was a cover for his activities as a contact between the secret British sabotage organization SOE and the Danish General Staff Intelligence Section, and also from 1943-45 between SOE and the Freedom Council.

During the Second World War, as a Freedom Fighter, Munck was involved in a military operation which enabled the majority of Denmark’s Jews, amongst them Danish physicist and Nobel Prize laureate Niels Bohr, to escape from the Nazis. On October 1, 1943, having learned that Hitler had ordered all Jews in Denmark to be arrested and deported, Bohr persuaded King Gustav of Sweden to make public Sweden’s willingness to provide asylum for Jews. On October 2, 1943 a Swedish radio broadcast confirmed this, and a mass rescue of 8,000 Danish Jews was quickly mobilized by the resistance which included Munck and many other Danes.

The operation was referred to as “a small Dunkirk” and ‘Skipper’ Munck secretly helped organize this Jewish exodus over the Öresund into Limhamn, Sweden. It was truly a miracle in Autumn 1943 – the majority of Danish Jews escaped, including Bohr, who eventually made his way to the U.S. where he joined the Manhattan project.

Munck and the other Danish resistance fighters had carried out what is considered to be one of the largest acts of collective resistance in countries occupied by Nazi Germany. As a result of the rescue – and Denmark interceding on behalf of the 5% of Danish Jews who were captured and deported to Bohemia, over 99% of Denmark’s Jewish population survived the Holocaust.

Skipperen, a book which describes this and other details of Munck’s life and wartime resistance activities, was written in 1975 by Jorgen Hæstrup.

Munck stayed on as editor of information for Berlingske Tidende until 1945, and as foreign affairs editor until 1946.

After the war, in 1947 Munck went into the Foreign Service and served as press attaché to the Danish Embassy in London 1947; at the Danish embassy in Helsinki from 1955, and from 1959-67 was Danish ambassador to Thailand.

A central figure in post-war anti-communist activities, Ebbe Munck worked with the Company and the Society for Freedom and Culture, where his many contacts including Erik Husfeldt, served as key links in the Danish political system. He was a board member of The Danish Club in London 1951-55, and the Anglo-Danish Society in London 1951-55.

Munck was Head of the Danish and international press delegation to Greenland during the royal couple’s visit in 1952. He was also co-founder of the Danish Expedition Foundation 1947; the Committee of the British North East Greenland Expedition 1950-53. Munck was an honored and decorated citizen, being awarded the Galathea Medal, the Royal Medal in silver, and also Knight of the Dannebrog .

In 2007, Janni Andreassen, an affiliate of the Arctic Institute, wrote a biography of Munck entitled To Show the Flag, compiled mainly from Munck’s own diaries, yet has a keen awareness of the man. For those familiar with the Danish language, Ebbe Munck’s book “Strejftog i Nord” (1959) describes many of his arctic adventures.

In his last years Munck served Queen Margrethe II of Denmark, as Hofchef (Chief of the Court) for the Danish Royal House; an advisory position which involved close daily contact with the Queen and Prince Henrik. The post of Hofchef is a lifelong appointment which traditionally is rarely replaced.

Yet Munck’s happiest moments were not the result of all the honors and recognition he received from his countrymen, but the times he spent in the vast Greenland wilderness.

In 1974 The Ebbe Munck Memorial Fund was founded at the initiative of Supreme Court Justice Bernt Plover (1901-94). The foundation’s aim is to create a lasting memory of Ebbe Munck through the distribution of honorary gifts or contributions to people in areas that had his special interest, including Research in Greenland, the name of freedom fighters during the occupation, Danish work abroad, journalism and more.

The fund is under the patronage of Queen Margrethe II and Prince Henrik.