IN SEARCH OF UPPER LIMITS 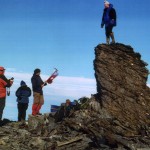 Middle stone column of the 3 discovered on of Mara Mountain

The northernmost mountain in the world is located half a days hike west of Cape Morris Jesup.

It is only a few thousand feet high and most strong hikers would be able to reach its summit with little difficulty.

The mountain is so remote that no one climbed it until July, 1998, when a group of eight people reached its summit.

Some people now refer to the mountain as “Mara Mountain,” after Mara Boland who was the only woman in the group.

Not for Glory Seekers 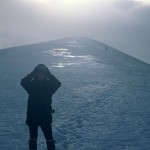 The route up Mara Mountain went up the eastern ridge that was covered with snow.

These stone columns are solid rock and are evenly spaced in a perfectly straight East-West line.

The evenness of these solid rock columns makes them appear as if they’re markers carved by an ancient race.