HOW TWO NEW ISLANDS WERE DISCOVERED 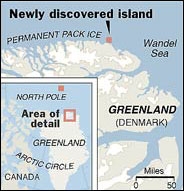 In July 1996, members of the “Top-of-the-World-Expedition” attempted to locate Odag Island which had been determined to be the world’s Northernmost point of land. This tiny island is 35 feet in diameter, and about four feet above sea level.

Although the Danish army’s “Sirius” sled patrol passes this location every winter, the island had not been sighted for many years. It was believed that the island was buried under snow and ice, or it had been bulldozed away by the shifting force of the icepack.

The Top-of-the-World-Expedition members first hiked from the mainland, over the melting sea ice, to Kaffeklubben Island. From there they fanned out and searched for the island – trekking through the melt-water pools and snow drifts that covered the ice north of Kaffeklubben.

Hours later, an expedition member spotted a single rock sticking out of a melt-water pool. It was resting on a gravel bar a few inches beneath the surface of the water.

Odag Island was submerged under water which had been dammed up by surrounding snowdrifts. When two expedition members revisited the island three days later, a thaw hole in the ice had drained the water from the melt-water pool and the island was now fully visible. 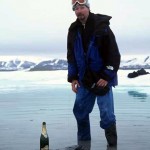 Dr. Peter Skafte standing on the 1996 island before it emerged from melt water pool

But years later it became clear that neither the GPS coordinates nor the photographs of the island matched those of Odag Island. To everyone’s surprise the members of the Top Of the World Expedition had accidentally discovered a new island slightly north of Odag Island. Once again Ultima Thule had been moved a step farther… Northward. The new island was named “Top of the World Island” after the name of the the expedition.

But the story does not end here. In 1998, Dr. Peter Skafte spotted and photographed a new island a few miles north of “Top of the World Island” during an aerial reconnaissance.