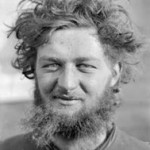 He was born in Nykøbing Falster, Denmark. His father was Lorentz Benzon Freuchen (1859-1927) of Danish Jewish descent, and his mother was Anne Petrine Frederikke Rasmussen (1862-1945).

Peter Freuchen was Great Uncle to Arctic Thule expedition organizer, Dr. Peter Skafte. Freuchen made a distinct impression upon his nephew, telling arctic tales to young Skafte while putting out cigarettes on his wooden leg (having lost a leg to frostbite in 1926).

His Danish island estate was named Enehoje, but Freuchen spent many years in Thule, Greenland, exploring and living with the Polar Inuit people, and working with Knud Rasmussen, who crossed the Greenland icecap with him.

At age 20, Peter Freuchen went on the 1906-08 “Danmark Expedition” (named after the expedition ship “Danmark”) to Northeast Greenland. The expedition ship sailed as far north as possible, established a base, and then traveled by dogsled further north along the coast, mapping the region. The purpose of the expedition was to explore and map the northernmost East Greenland. Extensive studies were made using dog sleds, traveling a total of more than 6,500 km (4,039 mi), which up to that time was a record distance for Arctic expeditions.

In 1910, Freuchen & Rasmussen established the Thule Trading Station at Cape York (Uummannaq), Greenland. The name Thule was chosen because it was the most northerly trading post in the world, literally the “Ultima Thule” at that point in time.

“[Dr. Frederick A.] Cook was a gentleman and a liar. [Rear Admiral Robert E.] Peary was neither.”
–quote often attr. to Peter Freuchen; yet made by friend of Chauncey M. Depew, U.S. senator from New York, in a speech before the Transportation Club, and published in the New York Times, March 31, 1910

Thule Trading Station became the home base for a series of seven expeditions, known as the Thule Expeditions, between 1912 and 1933. Freuchen served as store manager in “Cape York Station Thule ” for 10 years.

The First Thule Expedition (1912, Rasmussen and Freuchen) aimed to test Robert Peary’s claim that a channel divided Peary Land from Greenland. They proved this was not the case in a remarkable 1,000-km journey across the inland ice that almost killed them. Clements Markham, president of the Royal Geographic Society, called the journey the “finest ever performed by dogs.”

Freuchen wrote over 30 books including personal accounts of this journeys in Vagrant Viking (1953) and I Sailed with Rasmussen (1958), and Freuchen and Rasmussen held a series of lectures in Denmark about their expeditions and the Inuit culture. Other published titles from Freuchen included Adventures in the Arctic, Arctic Adventure: My Life in the Frozen North, Book of the Eskimos, Ice Floes and Flaming Water, Ivalu the Eskimo Wife, and Book of the Seven Seas.

Freuchen’s first wife, Mekupaluk, who took the name Navarana, followed him on several expeditions. When she died he wanted her buried in the old church graveyard in Upernavik. The church refused to perform the burial, because Navarana was not baptized, so Freuchen buried Navarana himself . Freuchen strongly criticized the Christian church which missioned among the inuits without understanding their culture and traditions.

When Freuchen returned to Denmark in the 1920′s he joined the Social democrats and contributed with articles in the newspaper Politiken.

Freuchen later became the leader of a movie company, returning to Greenland in 1932 on an expedition financed by the American Metro-Goldwyn-Mayer film studios. For over 20 years he was employed by the movie industry as a consultant and scriptwriter, specializing in Arctic-related scripts, most notably MGM’s 1933 Oscar winning Eskimo/Mala The Magnificent starring Ray Mala.

In 1933, Knud Rasmussen used the character name Navarana (Freuchen’s deceased wife’s name) for the lead role in the movie Palos Brudefærd, which was filmed in East Greenland. 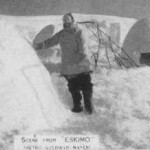 In 1935, Freuchen visited South Africa, and by the end of the decade, he had also traveled to Siberia. In 1938 he founded The Adventurer’s Club (Eventyrernes Klub), which still exists.

During World War II, Freuchen was actively involved with the Danish resistance movement against the Germans, even without one leg which he lost to frostbite in 1926. He was imprisoned by the Germans during the war, and sentenced to death, but he managed to escape and flee to Sweden.

Freuchen later moved to the USA where he and his wife Dagmar, a fashion illustrator, lived in New York City, and maintained a second home in Noank, Connecticut. In 1956, Freuchen won $64,000 on The $64,000 Question, an American TV quiz-show on the subject “The Seven Seas”.

The preface of Freuchen’s last work, Book of the Seven Seas, is dated August 30, 1957, in Noank. He died of a heart attack three days later in Elmendorf, Alaska. After his death, Freuchen’s ashes were scattered on the famous table-shaped Thule Mountain in Greenland.

Freuchen’s memory was later honoured by the planting of an oak tree and creating an Eskimo cairn near the place, where he’d left Denmark for Greenland back in 1906. It is located East of Langeliniebroen in Central Copenhagen and not far from the statue of The Little Mermaid.