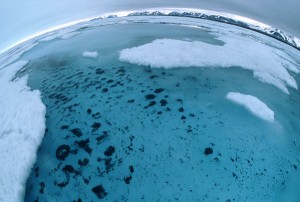 QUEST FOR THE “TOP” OF OUR EARTH

We humans crave to explore uncharted territories whether they are mental or physical.  Some try to satisfy their craving by traveling to distant cities around the world.  Modern cities are all linked by a global economy and technologies that are spread in an instant.  Their small differences are usually drowned in forever greater crowds and intense noise.

All that is left for the adventurous traveler is to seek out the few relatively empty corners of the world.

This is one of the reasons why we journey to Greenland’s Arctic Thule Region - where no one lives - where there are no physical manifestations of the human mind to distract us from our mystic union with nature… a place where the silence is a thousand years deep.

The great sea
has sent me adrift,
it moves me as the weed in the great river,
earth and the great weather
move me,
have carried me away
and move my inward parts with joy.
–Uvavnuk poem

We believe that the greatest luxury and freedom for an adventurer is to escape from this crowded world.  If you feel the same way, consider supporting our quest, or join us on our next journey.

Every adventure is a story in itself, spawned by threads of other ideas, writings and footprints of other wanderings.  Arctic Thule is certainly no exception.

For those who can read Danish, we recommend Danmark Expeditionen: Til Grondlands Nordostkyst by Achton Friis. It is a masterpiece about the epic journeys by the men of the Danish expedition who explored and mapped the north east coast of Greenland between 1906 and 1908. It is in Danish and as far as we know it has never been translated into English. We also recommend that you read Peter Freuchen’s book, My Life in the Frozen North.

Freuchen, accompanied by Knud Rasmessen and two Inuits, traveled with dogsleds from Thule(Greenland) across the inland icecap to Pearyland in 1912. Freuchen makes this incredible journey come alive. He was a great storyteller and one of Skafte’s distant relatives. Freuchen cut his own frostbitten toes off one of his feet on the Fifth Thule Expedition and later had his lower leg amputated. Skafte still has a memory of him putting out his cigarettes on his wooden peg leg.

Peter Skafte, the organizer of the Arctic Thule project, first became inspired to visit Northern Greenland in 1961 while staying with the Danish ambassador Ebbe Munck in Bangkok.  Munck was a famous Danish polar explorer and resistance fighter during the Great War.

One day Skafte asked the ambassador about a small stone he kept on a bookshelf in his study.  Munck explained that it was a special stone because it came from the tip of Cape Morris Jessup, the northernmost point of land on earth.  Skafte decided then that some day he would have to go and retrieve his own stone.  This undertaking proved to be far greater adventure than he had ever imagined.

The last of the Danish polar explorers was Count Eigil Knuth (1903-1996).  In his later life, Knuth would visit North Greenland during the summer where he would excavate archaeological sites.  Although his archaeological methods were antiquated, his work gave insight into the periods of human settlements in northern Greenland.

He must have had considerable political influence because he managed to keep most researchers out of North Greenland for decades.  Skafte remembers him as being extremely creative and well read, but also critical and unpredictable.  His small booklet, “Independence,” written in several languages (including English) is a work of art and worth reading.

Arctic Thule as part of a Life’s Work

As an anthropologist, Dr. Peter Skafte has indeed made Arctic Thule expeditions a significant part of his life’s work.  Now, equipped with satellite photos and highly pinpointed data, Dr. Skafte and his team continue their quest to identify and map the Arctic Thule region… which represents the “Top of the World.”