THOSE WHO WENT BEFORE

A number of ardent explorers and scientists have contributed to our understanding of northern Greenland. Some of the most colorful and charismatic personalities who ventured into this part of the world were Peary, the men of the Denmark expedition 1906, Einar Mikkelsen, Knud Rasmussen, Peter Freuchen, Lauge Koch, Ebbe Munck and Count Eigil Knuth.

THE ANCIENT LEGEND OF THULE – The Northernmost Land Mass on Earth 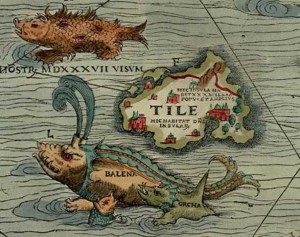 In 330 B.C. the Greek explorer Pytheas of Massalia sailed into the North Atlantic and discovered, what he believed to be Thule… the northernmost land on Earth. His book About the Oceans gave an account of this journey, but it has been lost for centuries.

Only a few references to Pytheas’ explorations are known from the works of other ancient scholars, but these accounts are too general to pinpoint the location of Thule with any degree of certainty.

Through the ages the idea of Thule has stirred the imagination of explorers, intellectuals and poets (for more historical & literary references click here ).

Although the actual location of Pytheas’ Thule was a mystery, the polar explorers of the 19th Century used the name to characterize the limits of their discoveries as they pressed farther and farther north.

This ancient geographical mystery was believed to be solved when in 1900, Robert E. Peary rounded the northern tip of mainland Greenland in his search for the shortest land route to the North Pole. Peary wrote:

“I felt that my eyes at last rested upon the Arctic Ultima Thule.”
–Robert E. Peary, at Cape Morris Jesup, Greenland 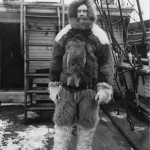 Robert E. Peary in furs he wore during his Arctic expeditions

Peary erected a cairn at this location and named it Cape Morris Jesup after one of his main sponsors.

For decades Cape Morris Jesup remained the undisputed northernmost point of land in the world, but then in 1969 a team of American and Canadian scientists, attempting to correct inconsistencies of the Peary Land maps, determined that Kaffeklubben Island, located 30 miles east of Cape Morris Jesup, was .2 nautical miles farther north.

Kaffeklubben Island was first sighted by Peary in 1900 and later given its current name by Lauge Koch in 1921 while he was mapping the northern coast of Greenland. It is separated from the mainland by a couple of miles, is about 800 meters long, 150 meters wide and rises about 30 meters above sea-level. 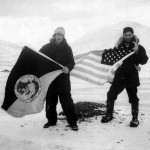 Koch named this island Kaffeklubben (“coffee club” in Danish) after a group of geographers which met regularly at the University of Copenhagen.

The island had first been visited on July 6, 1960, when two U.S. helicopters and their crews landed there, accompanied by William Davies and Daniel Krinsley, geologists with the U.S. Geological Survey and the Danish Count Eigil Knuth. However, they were unaware at that time that Kaffeklubben Island was farther north than Cape Morris Jesup.

This group built a cairn on top of the island and and deposited a note commemorating their visit. The note was protected from the elements by a thin 35 mm metal film container. Dr. Skafte found the film canister outside the cairn in 2003. It had been chewed on by a sled dog or a bear, and the note inside had become wet and damaged.

In 1978, while a team of Danish geodetic scientists were determining the latitude and longitude of Kaffeklubben, one of the team’s members, Uffe Petersen, spotted a small dark shadow in the sea-ice to the north of Kaffeklubben. After looking at the object with binoculars Uffe Petersen believed that it had to be an island. Another team member was sent out to the location in a helicopter and it was confirmed that a new northernmost island had been discovered. Uffe Petersen named the island Odaq after Peary’s Inuit companion to the North Pole.

Only four questionable sightings of Odaq Island have been made since that time. The difficulties at spotting a low lying island on the arctic sea-ice can be attributed to the following problems:
1. A two inch snow cover can make an island indistinguishable from the surrounding snow drifts
2. The pattern of snowdrifts on the sea-ice is changing from year to year and can reveal or conceal a land feature
3. A low lying island creates a natural wind break which can lead to the formation of snowdrifts
4. Trapped or dammed up melt-water between snowdrifts on the sea-ice can submerge a low-lying island
5. Traversing the sea-ice on foot to confirm an island is only possible when the melt-water pools on the ice are less than two or three feet deep
6. To spot Odaq Island, the observer must be present during the few weeks, or days, in the summer when the island is visible
7. GPS locations vary significantly in the northern latitudes because satellites that triangulate on land positions are inaccurate due to being so low on the horizon