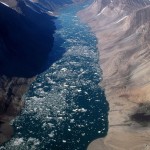 The Greenland National Park is the largest national park in the world encompassing an area of 375, 000 square miles of the northeastern part of Greenland. The park includes part of the inland icecap and part of the surrounding ocean.

As opposed to the American national parks, the Greenland National park was set up as biosphere reserve, rather than for the enjoyment of the people. Hence, in the past it was difficult to secure a permit to enter the park without having a specific research project in mind. Today the rules are a little more lenient, but still the permit process is complicated and time consuming.

No one lives in the park on a permanent basis. The Danish army patrols the coastline of the Greenland National Park with dog sleds. The patrol unit is called the Sled Patrol Sirius, named after the Sirius star. 6 teams of 2 men each, skis with their dog sleds along different areas of the coastline. Each man serve two years in Greenland and uses his second year to teach a new recruit. 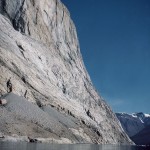 The Sirius Patrol’s headquarters, called Danneborg, is located in the southern part of the National Park. A few hundred miles north of Danneborg is a weather station called Danmarkshavn. It is manned by 7 men.

Still farther north on the coast is a military installation called Station Nord that is maintained from year to year by 3 to 5 men. Station Nord was a refueling station for American planes during the Cold War. Now it is basically an eyesore and a sad reminder of the incredible damage that vehicles can do to the fragile arctic ecology.

During the summer the park receives a larger number of visitors. Most of them are scientists carrying out various research projects. A few climbing and trekking expeditions may also visit the park. Most of these expeditions concentrate in the southern end of the park.