TOP OF THE WORLD? 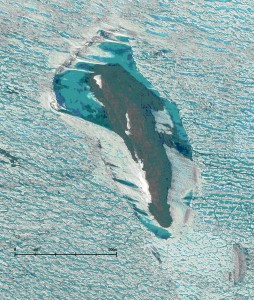 Kaffeklubben from 435 mi. in space

Kaffeklubben Island was discovered in 1900 by Robert E. Peary during his trip along Greenland’s north coast to find the best route toward the North Pole. In 1921 Danish explorer Lauge Koch named the island Kaffeklubben while mapping the northern coast of Greenland.

The name Kaffeklubben, (meaning The Coffee Club) was chosen to honor an informal academic “coffee club” of geographers which met regularly at the University of Copenhagen.

The island is separated from the mainland by a couple of miles and was first visited in July 6, 1960 when a team of American Air force personnel and scientists including Daniel B. Krinsley, William E. Davies, and Eigil Knuth became the first to land on the island with two U. S. helicopters.

This group built a cairn on top of the island and and placed a 35 mm still film canister with a signed note inside.

In 2003, Dr. Skafte found the film canister outside the cairn. It had been chewed on by a sled dog or a bear and the note had become wet and mangled (see image of the note below).

In 1969, a team of American and Canadian geographers and surveyors discovered that the northern part of Kaffeklubben Island was a few hundred meters north of Cape Morris Jessup.

It is noteworthy that Kaffeklubben island supports sparse plant life. Even here flowers have conquered the elements. During the brief arctic summer, the world’s northernmost flower can be located on the tip of Kaffeklubben island – it is a Purple Saxifrage.

Note from 1960 expedition, signed by all expedition members. The note was found in a metal film canister outside the cairn, partially chewed by an animal.

Once again… A New Northernmost Point of Land

In 1978 a group of Danish surveyors visited Kaffeklubben and one of the team’s members, Uffe Pedersen, spotted a small gravel bar in the sea-ice 1.3 km to the north.

The island was later visited by helicopter, and the small gravel bar turned out to be a new island.

That new island was named Odaq, after Peary’s Inuit companion who had accompanied him to the North Pole. To learn more about Odaq Island… click here .