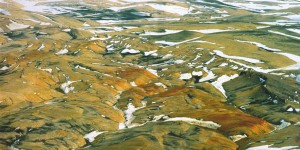 Pearyland from the air, in Summer, near Frederic P Hyde fjord

Peary Land is Greenland’s Northernmost region and lies closer to the North Pole than any other landmass – approximately 700 km South.

This region is mountainous and only receives a few inches of precipitation per year. In July the average temperature tends to stay above freezing.

During “hot” spells the temperature may reach 60 degrees Fahrenheit.

Summer at the “Top of the World”

At this time of year the sun circles the sky, only a few degrees lower at midnight than at noon. The land is frozen solid a foot beneath the surface, which forms a layer of permafrost.

Due to this permafrost, only the surface of the ground melts during the few weeks of summer. Melt-water cannot sink into the ground and forms bogs with hundreds of streams that meander toward the sea.

Here and there the bones of muskoxen tell stories about struggles with wolves long ago. Now bleached by many seasons, the bones are slowly sinking into the tundra where they give nutrients and life to small patches of grass and flowers. They are the silent testimony to Mother Nature’s harsh command, “For there to be life something must die.”

The weather typically changes every 24 hours, from cloudy skies with a cold wind from the northwest, to a calm and sunny period during which bumble bees, butterflies and other insects hurry about to make their livelihood, for winter is only weeks away.

Likewise, the Arctic Thule expedition only has a small window in July when the snow melts sufficiently to reveal solid land, and weather permits small aircraft to land and take off from the tundra.

The land is frozen solid a foot beneath the surface