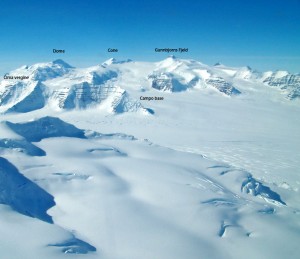 It also figures prominently in the history and inspiration for the Arctic Thule project.

In 1961 Arctic Thule expedition organizer Dr. Peter Skafte met Ebbe Munck, one of the explorers who had climbed Gunnbjørn Fjeld in 1935.

When Skafte asked Munck about climbing the highest mountain in Greenland, he noticed a rock on Munck’s bookshelf. Munck explained that it was a rock from Cape Morris Jesup, which he described as being “from the Northernmost tip of the world, a place where a river runs into the ocean.”

It was upon hearing Munck’s description of this remote place, that Skafte decided to set out for “Arctic Thule.”

Gunnbjørn Fjeld is located in the Watkins Range on the east coast, which contains several other summits above 3500 metres. It is a nunatak, a rocky peak protruding through glacial ice. Its height is often given as 3,700 metres (12,100 ft), although figures vary slightly.

In the Icelandic Sagas, and thus by the Norsemen, the mountain was called Hvitserk, literally meaning “whiteshirt”.

Gunnbjørn Fjeld was first climbed on 16 August 1935 by Augustine Courtauld, Jack Longland, Ebbe Munck, Harold G. Wager, and Lawrence Wager. It is named for Gunnbjorn Ulfsson, the Viking who was the first European to reach Greenland.